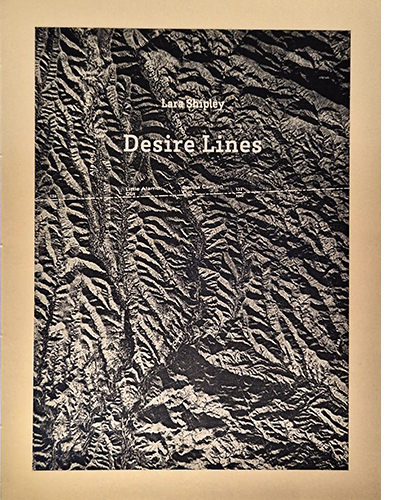 Desire Lines follows old and new movements through the desert landscape of the Sonoran borderlands of the United States and Mexico: paths taken by migrants and border agents, of missionaries and conquistadors, of indigenous people and industrialists. The messy and at times violent collision of peoples has created a region that defies the harmfully simplistic narratives so frequently attributed to our borders.

Shipley’s photographs focus on the disorienting experience of this landscape – a place of beauty or danger depending on the perspective of those moving through it. Deceptively empty, the landscape is under constant watch, heavily surveilled and controlled, with an ever-increasing military presence that has seeped into the lives of residents in surrounding communities.

Desire Lines looks at migration as an inherently human act – one that has defined human history and the geopolitical framework of our planet. Shipley’s photographs are seen in dialogue with interviews from migrants and long-term residents, 20th century oral histories and 19th and 20th century archival photographs. This mix of time and perspective highlights a region long marked by migration, individual desire and preservation, but also systemic dominance and colonial control, hidden in hundreds of square miles of remote terrain.

Lara Shipley is an American photographer. She exhibits in galleries across the United States, and her work has appeared in notable exhibitions at the National Museum of Women in the Arts in Washington, DC, GuatePhoto international photography festival in Guatemala, the Benaki Museum in Greece and a recent solo exhibition at the international photography festival Cortona on the Move, in Italy. Her work is in collection institutions such as the Museum of Modern Art (NYC), Whitney Museum of American Art (NYC), Smithsonian American Art Museum (Washington D.C.), Museum of Contemporary Photography (Chicago), and the Nelson Atkins Museum for Art (Kansas City). Lara’s photographs have appeared in publications such as Harper’s Magazine, Smithsonian Magazine, British Journal of Photography, Atlantic Monthly, Vice, and NPR. She received a MFA in photography from Arizona State University and a Bachelors of Photojournalism from the University of Missouri. She is an Assistant Professor of Photography at Michigan State University. www.larashipley.com