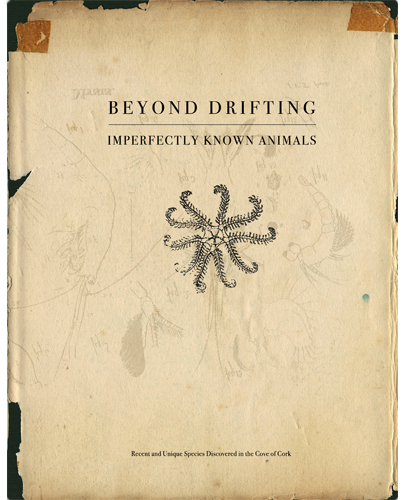 Beyond Drifting: Imperfectly Known Animals encapsulates in miniature the much larger environmental problems of an imperfect world. This work presents a unique collection of plankton specimens related to pioneering discoveries made by naturalist JV Thompson in Cork Harbour during the 1800s. These recently found specimens are deceptive, however, and mysteriously conceal their true origin.

Plankton form a diverse group of microscopic marine organisms that are unable to swim against powerful ocean currents; they exist in a drifting, floating state, enveloped in the black deep.

As fragile as they are, current scientific research shows that plankton ingest microplastic particles, mistaking them for food. Plankton are a crucial source of food for larger creatures up the food chain – compounding the grave impact of plastics on marine life and, ultimately, humans. Plastic debris is now ubiquitous in the Anthropocene, the period since humanity has had a significant impact on our global environment, and today nearly all living creatures are affected by its widespread contamination.

The plankton specimens in this work are beautifully photographed objects of marine plastic debris, recovered from the same location as naturalist John Vaughan Thompson’s plankton samples from 200 years ago. Long-exposure photographs record movements of recovered plastic objects floating in a black void, captured on expired film and with faulty cameras. Film grain is intentionally visible, alluding to microplastic particles being ingested. Each specimen has a new scientific name reflecting early Latin origins and containing the word ‘plastic’ hidden within its title.

“Beyond Drifting: Imperfectly Known Animals is an astounding piece of work, one in which Barker takes the most humdrum of things – plastic detrius – inserts it into an intriguing, multilayered historical narrative, lends its physical form a gossamer, airy beauty, and presents the whole to us in the form of a book. Not just any book, but a replica of an old science publication from the 1800s, including mould-spotted pages, a library lending form and specimen labels.” – Lucy Davies, V&A Magazine May 2017

“Barker’s intelligence and spunk in designing this book is the reason for its success. In addressing a contemporary environmental problem in the guise of a 19th century album, she does more than connect the viewers with the past and nature, a time where the oceans were clean. Instead, we are allowed to make our own discovery, and in doing so, reconnecting with sense of wonder and mystery, when looking at photographs.”
– Sabrina Mandanici for Collector Daily

“Mandy Barker’s work on plastic has been developing for some time. In its latest advance, she looks at micro-particles of plastic as a species of a lunatic plankton, floating about the sea, and she has included a rather wonderful pastiche book of old-fashioned science as a way of getting us into her subject.”
– Francis Hodgson, review from Unseen

* This body of work was shortlisted for 2017 Prix Pictet, the global award in photography and sustainability.
* Mandy Barker and Overlapse NOMINATED for the Deutsche Börse Photography Foundation Prize 2018 for this publication