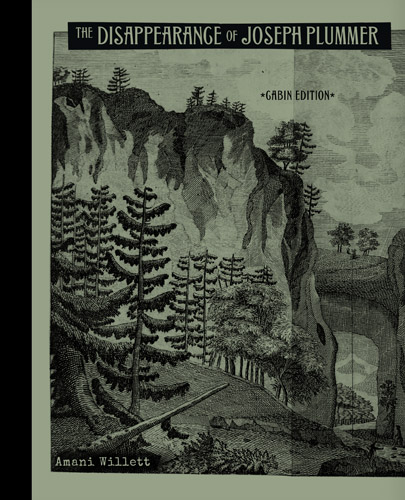 A compact, rustic reprinting of The Disappearance of Joseph Plummer, ready to view fireside in that remote cabin in the woods! With a slightly revised edit from the original, the cabin edition includes three new images that continue the search for the elusive hermit Joseph.

A curious tale spun from the life of mysterious hermit Joseph Plummer, who lived in the woods of central New Hampshire in the late 1700s. Two centuries later an unsuspecting man purchased the mythical loner’s land and built a hideaway cabin for himself – only to discover the legend of Joseph lurking deep in the seclusion of the forest. This atmospheric photobook explores our human desire to escape and find peaceful solitude, far from the burdens and apparatus of modern society.

Exploring themes of history, place and mythology, Amani Willett’s photographs track the hermit’s overgrown trail through the land his family now owns. Willett’s father, unaware of the reclusive man who roamed the area nearly 200 years before him, acquired the deed 40 years ago with the intention of establishing a rustic retreat.

Upon learning of Plummer’s existence, Willett endeavoured to photograph a fragmented narrative amidst the same landscape he once inhabited. He scoured local archives to find first-hand written accounts describing the hermit’s character, as well as personal effects which appear in the book. Adding to the visual journey are historical portrait and landscape images from the region that inspired Willett’s physical intervention in the form of destructive applique and collage.

The resulting work mirrors the past while keeping Plummer’s unknowable history intact. It also reveals how the hermit’s existence still resonates today – not only as a constant counterpoint to our fast-paced, technology-driven times – but in conjuring the same romanticised allure that tempts new generations to also venture off-grid.

Based in Brooklyn NY, Amani Willett‘s photography is driven by conceptual ideas surrounding family, history, memory, and the social environment. His first monograph, Disquiet, (Damiani, 2013) – a meditation on starting a family in a time of social unrest and uncertainty in America – was selected as one of the best books of the year by PDN, Photo Eye (Todd Hido) and Conscientious (Joerg Colberg). Willett’s photographs feature in the books Bystander: A history of Street Photography (2017 edition, Laurence King Publishing), Street Photography Now (Thames and Hudson), New York: In Color (Abrams) and in a wide range of publications including American Photography, Newsweek, Harper’s and The New York Times. Amani completed an MFA in Photography, Video and Related Media from the School of Visual Arts, NY in 2012.

“The mystery is present from the first images. In them, the blurred silhouette of an evasive character takes us into a universe as idyllic as threatening, submerging us in an atmosphere of suspense and uncertainty. The echo resounds in the deafening silence of a wild natural environment, and little by little, between enigmatic figures and encrypted texts, we arrive at a mysterious cabin where firewood is piled up neatly in the entrance. Narrative sometimes discontinuous contributes to increase the enigma. The character of Plummer is in itself a mystery and will remain as such.”
– Gloria Crespo MacLennan, El País (Translated from Spanish)

Reviews for the hardback edition:

“The first time I had the book in my hands and leafed through I had goosebumps. It is a treasure — beautiful, mysterious, each page refreshing. It sparkles with ideas and is beautifully designed.” – Elisabeth Biondi, Curator and former Visual Editor at The New Yorker

“The Disappearance Of Joseph Plummer is a beautiful, elegant and cinematic tale, and more to the point, it allows Willett to stylistically flex his muscles and stretch his wings. His talent as a photographer has never been in doubt, now he has also proved himself very adept at storytelling.”
– Robin Titchener, Review for Photobookstore Magazine

“A dark and affecting book, The Disappearance of Joseph Plummer draws us into the inscrutable secrets of a centuries-old story, ultimately leaving us in the woods to find our own way out.” – Adam Bell, Photoeye

“Intriguing parallels between two lives lead father and son into the haunting journey and evocative photographs that follow. Willett’s enchanting images become an ode to the art of disconnecting, the allure of being lost and the strange ways our lives circle each other.” – Suzanne Révy and Elin Spring

“An intriguing and very elegant book… the appeal is obvious – drop out of the rat race, back to nature, anti-tech, authenticity – further evidence and a warning cry that how we all live today is far removed from how we should live. Human connection is all.” – Simon Armstrong, Tate book buyer

“Presented as surreal and cinematic story telling, The Disappearance of Joseph Plummer is the perfect combination of nightmare and daydreams, beautifully mysterious and intriguing, in the style of all good novels.” – Aline Smithson, Lenscratch

“For me this is the most inspiring photobook I’ve seen so far this year.” – Carl Bigmore, photographer

* Antenne Books gift guide for those who like the esoteric, December 2019

Format Festival ‘Mutable/Multiple’ – 15 March – 9 June at QUAD, Derby UK
Composed around a series of photographic works that challenge modes of documentary and storytelling, Mutable/Multiple explores how narrative, history, memory and myth can be recalibrated as a way of coming to terms with complex and changing realities.