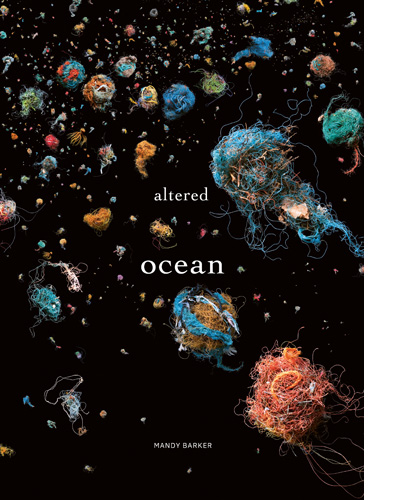 A comprehensive catalogue of Mandy Barker’s photographic works exposing the crisis of plastic pollution in the world’s oceans. This in-depth survey features series made over the past ten years, released to coincide with major solo exhibitions and including works from INDEFINITE, SOUP, SHOAL, PENALTY, Hong Kong Soup:1826 and Beyond Drifting. Numerous reproductions from Mandy’s sketchbooks offer a behind the scenes look into her thought process during project development.

OUT OF PRINT
Check these stockists: Impressions Gallery and Setanta Books UK

Concerned with the effects of marine plastic debris, Barker’s photographic work has reached worldwide audiences through international exhibitions, educational outreach, media reports and other means. Her aim is to expand public awareness of the environmental crisis by using aesthetically attractive visuals to communicate evolving scientific research.

This publication is introduced by Professor Richard Thompson OBE, a renowned marine scientist and Director of the University of Plymouth’s Marine Institute. His work has contributed to legislation on microbeads in cosmetics and other forms of plastic pollution.

Other texts include a foreword by Mandy Barker and an essay, Picturing Plastic Oceans, by Liz Wells, Professor in Photographic Culture at University of Plymouth. Barker also provides insight into the making of her images through an extensive survey of her personal process sketchbooks.

Her first photobook, Beyond Drifting: Imperfectly Known Animals was recognised by Smithsonian Magazine as one of the Top 10 of 2017, and received widespread attention for its subject matter and design.

Editing and design by Tiffany Jones

Based in England, UK, Mandy Barker is an international award winning photographer whose work involving marine plastic debris has received global recognition. Her series Beyond Drifting: Imperfectly Known Animals was shortlisted for the 2017 Prix Pictet, the global award in photography and sustainability, and the publication nominated for the 2018 Deutsche Börse Photography Foundation Prize.

“Dedicating her work to raise awareness and activism about the global crisis of ocean debris, Barker combines engaging and shocking photographs, sketches, and scientific research to produce some of the most urgently consequential contemporary art of this century.” – Photoeye, June 2019

“What an outstanding and timely project this is, creating beautiful but unsettling constructed simulacrums of animation out of strictly inanimate oceanic plastic pollution. A truly handsome book.” – Mike Chisholm

“She indulges in evil poetic exaggerations – blue plastic gloves simulating a coral reef or toothbrushes skittering about like shoals of fish… Barker makes the garbage glow and dazzles us with its banal fatality.” – European Photography magazine, Issue 106