It’s been a wildly exciting time since Mandy Barker’s first photobook Beyond Drifting: Imperfectly Known Animals was released 1st May! Mandy has been exhibiting the series non-stop since late March – starting at the FORMAT Festival in Derby, then through May at the Victoria & Albert Museum in London (Prix Pictet SPACE). There is still time to see exhibitions at Nature Museum Fryslân (Noorderlicht, Plastic: Fossil to Fossil through June), and until 2 July where Mandy first created the work during a residency – at Sirius Arts Centre in Cobh, Cork, Ireland. During the opening weekend of her exhibition at Sirius Arts Centre, Mandy spoke with Roger Overall – recording an audio interview for his Documentary Photographer Podcast.

The originality of Mandy’s approach to exposing an issue of widespread environmental concern has captured the attention of science-focused publications Smithsonian (for an interview and Instagram takeover), New Scientist, Live Science and Wired; The Guardian and The Telegraph Magazine highlighted her work; Creative Review spread the word about the unique book design; and Mandy appeared in photographic publications Photoworks (interview) and BJP. Even The Socialist Worker had fine words to say about her installation at the V&A: “Perhaps the most original work is Mandy Barker’s microscope polemic against pollution.” Perfect! 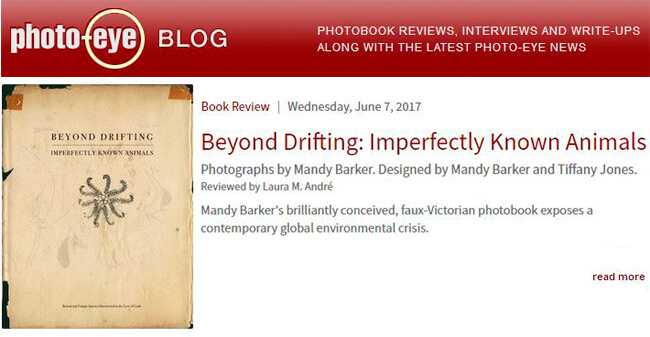 We are thrilled that Beyond Drifting has been reviewed so thoughtfully by Laura M. André at Photoeye – the go-to online photobook seller in the US. André describes her full experience of the book, and compares Mandy’s approach to Anna Atkins’ 19th century work, writing:

“Now, 170 years after Atkins, another British woman has produced an important photobook that echoes Victorian-era science even as it exposes a contemporary environmental crisis. Mandy Barker’s Beyond Drifting: Imperfectly Known Animals similarly occupies that liminal space where art and science converge, and its impeccable presentation exemplifies how book design can extend content.”

The entire review is well worth a read.

And Lucy Davies wrote a wonderful piece in V&A Magazine (Spring 2017), enthusiastically proclaiming Beyond Drifting ‘an astounding piece of work’ – text below: 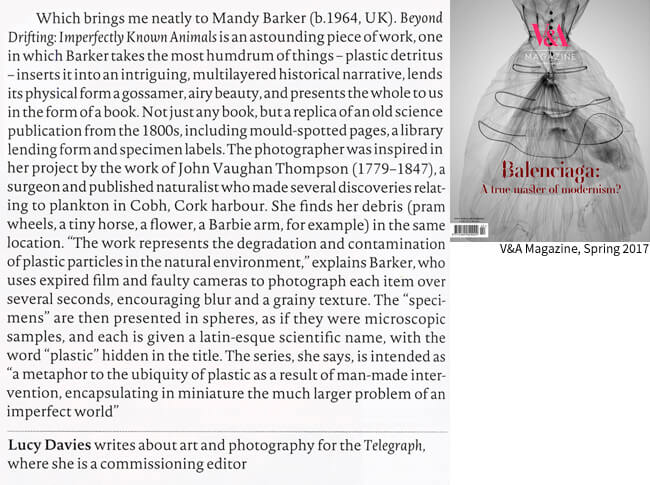 A massive thank you to these writers and media – along with others – for sharing stories about Mandy and her phenomenal photographic work! Also thanks to the physical (and online) bookshops stocking Beyond Drifting, including Photobookstore (UK) for featuring it in their Recommended list.

It’s admirable, too, that during this period Mandy found the energy to sail aboard Greenpeace UK’s Beluga Expedition off the western coast of Scotland for a week, searching for more marine plastic debris to photograph (sadly, it wasn’t difficult to find). Follow her on twitter to read all about it!

You can call me Nana
by Will Harris