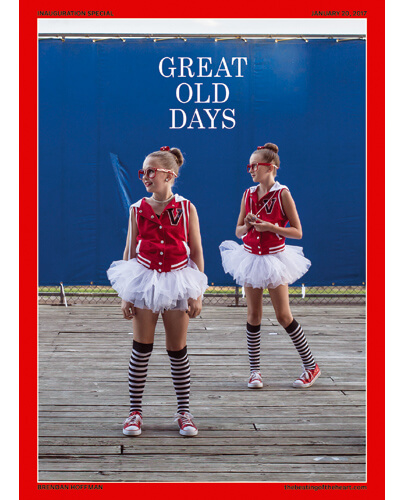 Brendan Hoffman photographed over a period of three years in the town of Webster City, Iowa, where workers at a long-running factory lost their jobs to Mexico. Such job losses became a core issue in Trump's campaign, and with this publication Hoffman focuses on the people – and voters – whose struggles are now central in current political debate.

Amid the fertile fields of Iowa sits Webster City, a town of 8,000 people in the midst of an existential crisis. For nearly 75 years, manufacturing kept the town employed and prosperous, with a factory that made everything from motor scooters called Doodle Bugs to, most recently, washing machines under the brand Electrolux. The tree-lined streets with handsome single-family homes and a main street packed with local businesses are the very picture of middle class America. In 2011 the factory closed and moved to Mexico, laying off nearly all of a workforce that once topped 2,000. Companies that relied on contracts with Electrolux also went under, compounding the impact. Those who lost their jobs were left with limited options: learn a new trade, leave, or find another way to survive. This is the story of a community struggling to understand its place in a changing world while trying to hang on to a fading American dream.

With news clippings from The Daily Freeman-Journal and The Des Moines Register
Printed in Kiev, Ukraine

Brendan Hoffman (b.1980, Albany NY) is a documentary photographer based in Kiev, Ukraine, where his work reflects his interest in themes of nationalism, identity, history, and politics. His recent focus has been on Ukraine and the war in the country’s east, which he has covered for The New York Times, Newsweek, Getty Images, and others. Before that he documented the 2013-14 Maidan protests in Kiev. From 2007-2013 he was based in Washington, DC frequently working on Capitol Hill and at the White House. Brendan’s work has been recognized by Sony World Photography Awards, the Alexia Foundation, NPPA Best of Photojournalism, Pictures of the Year International, American Photography 29 and the White House News Photographers Association. He is a co-founder of the photography collective Prime.

A collaborative publication by Brendan Hoffman (of Prime Collective) and Overlapse
Limited copies available. More info at thebeatingoftheheart.com, and in our News section